*Schedules are subject to change. Players will be alerted of any changes 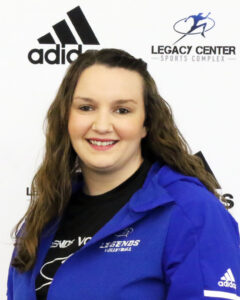 Kristen Althouse is a native of Mentor, OH, a suburb of Cleveland. She grew up playing for one of the top clubs in the area, CVC. From there, she was recruited to play volleyball at Eastern Michigan University. While there, she was a 4 year, starting middle blocker, tallied over 1,000 kills in her career and is still within the top 10 all time for blocks at Eastern. She loved her time there and it was her coach who helped her fall in love with coaching the game. She received her degree in Physical Education from Eastern Michigan University along with a minor in Health Education. While doing her student teaching, she also was the JV and Varsity assistant coach at Canton High School in Michigan and then went on to coach at Cleveland State University where she started her College Coaching Career. After being with Cleveland State for a Spring season, she then went on to be the first assistant at Loyola University Maryland in Baltimore for 3 years. During her time there, her focus was to train the blockers and hitters. She also helped club teams in the area and coached summer camps at the Naval academy and ran the camp at Georgetown University. ⁣
⁣
After 3 years of college coaching, she knew her passion was helping young athletes and girls learn to love the game of volleyball! She moved back to Michigan to coach club volleyball for the past two years with Legacy Volleyball Club and with Legends Volleyball Organization. Kristen is now very thankful for the opportunity to live out her dream of being the Director of Volleyball at the Legacy Center Sports Complex! She resides in Novi with her husband, Drew, and their dog Dusty.⁣